skip to main | skip to sidebar

I straight up bought it for the name and label design: 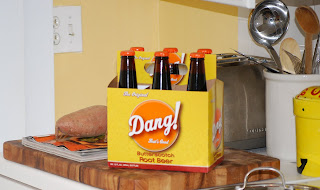 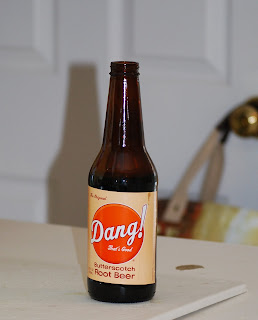 Root beer is another big Wisconsin thing (does it never end? our waistlines can't take this!). This is a butterscotch variety, which was much less intense than expected. A lovely review I discovered on the interweb (as my friend, Susanna, calls it) by Joshua Allen on his blog, The Knowledge for Thirst:
I grabbed a little something called Dang! Root Beer (full name: Dang! That’s Good Root Beer), popped the cap, and downed half the bottle in one swallow. It tasted like rusty grease. I was all: Way to memorialize our valiant soldiers, Dang. Nice work.
Then I took a paper towel and wiped off the rim and saw I’d removed a good amount of rusty grease. Then I took another, more tentative, sip and I was like: Dang! A nice sweet taste that’s in the ballpark of the undefeatable Weinhard’s, but not nearly as thick and rich so it’s a better companion to an elegant repast of grilled wieners.

I didn't get that rusty grease sitch - it was thick and rich, but not too much. Butterscotch not being my thing, I'd like to try Dang!'s original recipe. (Sidebar: the root beer out here, seriously, is delicious. They all seem to have a really subtle vanilla aftertaste that blows A&W out of the water. My favorite is a brand homemade by two local kids under ten who are saving up for college. I swear I did not make that up.)
Dang! was purchased on the drive home from Chicago. All three of our tails tucked between our legs, we stopped just across the Wisconsin border at Mars Cheese Castle, an amazing feat of medieval construction off Highway 94. 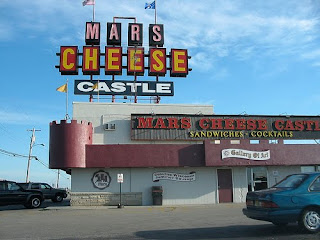 Photo via The Rocketeer on Flickr
Overwhelming was not the word. Expecting to see board games, UW-Madison Badger paraphernalia, and a pile of summer sausages, what I found, as Una waited with Veloc in the parking lot, was everything under the sun that may be cooked with/dolloped on/slapped in/eaten with any of those famous Wisconsin primary food groups: beer, brats and cheese. A massive cheese deli counter, jellies, sauces, a bakery . . . I quickly sampled all of the tasty tidbits offered, purchased the Dang! and went back out to Jon with one slice of a pecan kringle (a ginormous, flat danish of sorts).
We left Mars and headed a few rolls of the tire on down to Bobby Nelson. 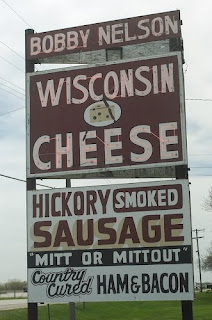 Photo via chicagofoodies.com
I thought this joint was going to serve cooked meals, but it is, in fact, a very small deli with a very large reputation. So I checked out the list of brats and chose the Jalapeno Cheddar variety on a hunger-induced whim. [Which we cooked last night for dinner and oh, the deliciousness. Jon put his brat on a bun with some mustard, but I sauteed mine up with orange bell peppers and bacon, and dipped it in green salsa. AHH, SO GOOD. . . Hmm, where are my leggings?]
So we finally continued on our way home, hungover and confused, having expected, in all honesty, a house-size vending machine in Mars and a gas station brat stop, and instead located legit specialty stores that required much too much gastronomical consideration.
Particularly after the Poopscapade.
Posted by A.A.B.B. at 7:48 AM 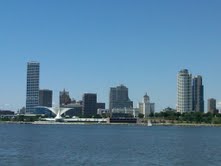 Need freelance PR or creative writing? Contact me at ProvidenceClassic@gmail.com